WHAT THIS SITE COVERS:

What is epoxy resin?

Where can I buy epoxy resin? 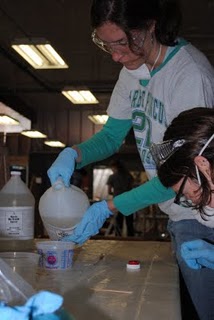 Learning about epoxy at a boat building school

Epoxy is both the basic component and the cured end product of epoxy resins, as well as a colloquial name for the epoxide functional group. Epoxy resins, also known as polyepoxides are a class of reactive prepolymers and polymers which contain epoxide groups. Epoxy resins may be reacted (cross-linked) either with themselves through catalytic homopolymerisation, or with a wide range of co-reactants including polyfunctional amines, acids (and acid anhydrides), phenols, alcohols, and thiols. These co-reactants are often referred to as hardeners or curatives, and the cross-linking reaction is commonly referred to as curing. Reaction of polyepoxides with themselves or with polyfunctional hardeners forms a thermosettingpolymer, often with strong mechanical properties as well as high temperature and chemical resistance. Epoxy has a wide range of applications, including metal coatings, use in electronics / electrical components, high tension electrical insulators,fiber-reinforced plastic materials, and structural adhesives. Epoxy resin is employed to bind gutta percha in some root canal procedures. [1]

What are EPOXY RESIN products?

Epoxy a set of chemicals that when combined form a sort of medium hard plastic. A set amount of Epoxy part A is mixed with a set amount of Epoxy part B and after a certain amount of time the two liquid products react and create a hard product. The resulting hard product is waterproof, chemical resistant and bonds well to most surfaces. Without the addition of pigments, epoxy resin systems vary in color from clear to reddish  brown. Many marine epoxies are 'clear' and special clear epoxy is also used for bar top and table top surfaces as well as outdoor pebble stone decks (epoxy for:).

Epoxy systems have many applications. The are used to build and repair boats, and as a protective floor, tank and pit coating or lining system. They repair runways and damaged concrete, metal and wood surfaces. Some epoxies can be applied underwater.

Thickeners, pigments, fillers and things like graphite, copper powder, and  teflon (tm) and be mixed into the epoxy for special applications. Other additives control other physical properties and or can help lower the epoxy price. Note that the Part A resin is much less expensive than the Part B curing agent.

On the down side, epoxy resin can be a brittle product and it is not color stable. It yellows and weathers in sunlight (UV). When pigments are added to clear epoxy it still yellows and the color changes. Because of these issues epoxies are generally painted over with 'regular' paint which provides UV protection and non yellowing color. Some epoxies also have issues with moisture during their critical cure cycle (google amine bush).

Most epoxy resin system contain on solvents and thus have little or no fumes or smell. Some epoxies do contain solvents including the so called water based floor epoxy resin products which can be thinned (and clean up) using water, but they also contain some more traditional solvent in them as well.

Help from the Granite State of New Hampshire .

Epoxies consist of a ‘base' and a ‘curing' agent. The two components are mixed in a certain ratio. A chemical reaction occurs between the two parts generating heat (exotherm) and hardening the mixture into an inert, hard ‘plastic'.

Epoxies yellow, chalk (or more commonly least lose their gloss), in direct sunlight (UV). The yellowing can be a real problem. For pigmented epoxies select colors that are dark or contain a lot of yellow (such as green). Even clear epoxies will yellow and cloud up. Often epoxies are top coated with latex or urethanes that will retain their color and attractive gloss. This is particularly true if color coding or matching company colors is important.

Epoxies will harden in minutes or hours, but complete cure (hardening) will generally take several days. Most epoxies will be suitably hard within a day or so, but may require more time to harden before the coating can be sanded.

By their nature, epoxies are hard and brittle. Additives can be added to epoxies that make them less brittle, but generally at the loss or reduction of other positive epoxy properties such as chemical resistance.

Other clues of cheap epoxies include ‘induction time' (after mixing the two components the mixture must sit for several minutes to ‘self cook' before being applied).

The best time to recoat epoxy is within about 48 hours after the initial coat. Because epoxies take days to reach full cure, a second coat applied shortly after the first coat will partially fuse to the first coat rather than forming a simple mechanical bond.

End users can thicken epoxy with many things, Tiny glass spheres, known as micro-spheres or micro-balloons are commonly used. Besides thickening, their crushable nature makes sanding the hardened epoxy easier. On the downside, they work like tiny ball bearings, resulting is sagging and slumping. Another thickener is fumed silica (a common brand name is Cabosil (tm)) which looks like fake snow. About 2 parts fumed silica with one part epoxy will produce a mixture similar in texture and thickness to petroleum jelly. Micro-spheres and fumed silica can be combined together.

Fisheyes are areas on a painted surface where the coating literally pulls away for the substrate leaving a coatingless void or fisheye. Often fisheyes are caused by surface contaminants such as a bit of silicon, wax, or oil. I have also seen them on clean plywood where epoxies paints have been used as sealers and the problem might be due to uneven saturation (soaking-in) of the epoxy into the wood. Surface tension plays a big part in fisheyeing. There are some additives that can be mixed into the epoxy that will reduce surface tension. Likewise, on wood, applying several coats of solvent thinned epoxy, instead of one coat of unthinned epoxy, seems to work well. Applying a thick coat of epoxy over a contaminated fisheye surface will bury the fisheye but expect the coating to peel away in the future. As a rule of thumb, always suspect some sort of surface contamination as the primary cause of fisheyeing.

Adding a bit of solvent to a solvent based or solvent-free epoxy is something that most manufacturers would not officially approve of and something that might not work with all epoxies. However, it can be done (unofficially) with the epoxies I deal with. Adding solvent to these epoxies will: 1) thin them out; 2) increase pot life; 3) allows them to flow off the brush/roller a bit more smoothly; and 4) perhaps allows them to ‘soak-in', penetrate, or may be soften, the substrate just a little bit. Not change is visible in the epoxy unless 12% or greater solvent is added. With that amount of solvent, the epoxies no longer cure with a glossy finish.

It is best to use epoxies with a mix ratio close to 1 to 1 as opposed to something 4-1, 5-1, etc. because errors in the mix ratios can be more pronounced with the latter. That said, no matter what the mix ratio is, some epoxies are more forgiving of mix ratio errors than others. One ‘trick' of epoxy vendors with odd or very sensitive mix ratios is to sell calibrated pumps that disperse the epoxy components in exact amounts.

How Thick? How thick should your coating be? Economics play a major role in determining how much coating to apply. One U.S. gallon contains 231 cubic inches. That's only 1.6 cubic square feet of surface at one inch thick and that's also assuming a solvent-free product. If the product is 25% VOC (i.e. 25% solvent) then dry thickness/coverage will be 25% less. Again, assuming a 1/4 inch thick coating (250 mils) maximum coverage will still be only 6.4 square feet per gallon. A solvent-free (100% solids) epoxy coating applied at 16 mils will cover 100 square feet per gallon (note: the wall paint in your office is probably 2-4 mils). While thick coatings sound like a good idea, they use so much product that they must be made very cheaply so that coating 1,000 or 10,000 square feet can still be done at a competitive price. A high quality, fairly expensive product with a coverage rate of 100 sq. feet or more per gallon, on the other hand, will have a low enough cost per sq. foot to provide both economy and top quality.